Friendly neighbourhood. (Back In Black) 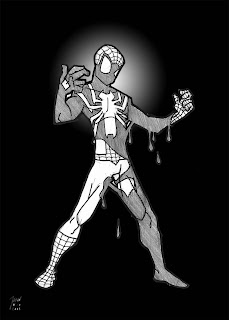 nananananananannnanana-BATMA-oh. Wrong hero.
So, todays art jam topic, spider-man. Done in about an hour or so with some quick photoshop backgrund to finish it off.
Posted by Jared at 6:13 PM No comments: 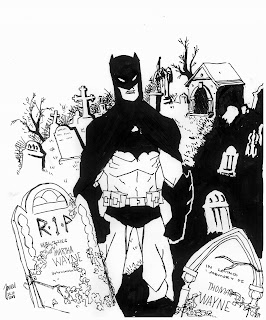 BATMAN!!!
Okay, so since it's the holiday, my fellow artists and I have decided to do a-sketch-a-day. An art jam, if you will.
So, this is the result of the first days art jam.
P.S. Since its a-sketch-a-day, expect daily updates( yeah right).
Posted by Jared at 11:20 AM No comments:

So, its been a long time since I've last posted and Ihave a lot to say.

In the past two days, a lot of exciting things have happened. Yes. I am exciting.

Firstly, I went to X08 yesterday. Yeah quite a bit of fun bt very very dissapointing. I went there expecting a sea of games, giant screens showing in-game footage and booth girls *smiles* but instead it was like a classroom filled with about 6 shelves of games, 3 pillar with 3 TVs on each to test games and a stage where Alison Carroll aka Lara Croft was signing stuff and doing stunts *glee*. And X08 is also where I got my new xbox 360 elite. :D*

Which brings me to my second post topic, Singaporean store operators(?) . As you, the reader might know by now, I'm a major comic book geek...all rounded geek. So one game I was looking for was Spider-man: Web of Shadows. So, went to X08 and a store and couldn't find them and decided to call different stores to see if it was even in stock yet.

And this repeats about 5 times each place I call. And then there'll be varied awnsers by the end of each of them! What The Funch?! (hehe. I don't swear.) So after about an hour of this, I eventually gave up and went to play other stuff. alone.

Well, Thats all for now. More updates soon to follow. I hope.
*smiley faces are gay. :D
Posted by Jared at 10:18 PM No comments:

I am now trying to get back posting my art and stuff here so, yeah. I went to Pizza Hut yesterday and decided to sketch some of the people. So, 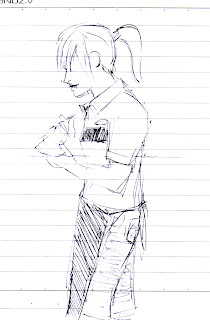 Some poor people sitting around me that suffered the fate of being poorly drawn. 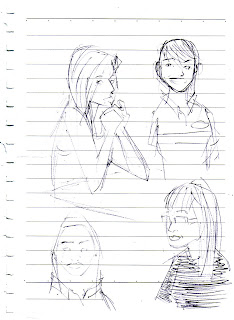 Well, the reason why i have not been posting i because of my examinations.

Okay, I now think that i don't have the time to--well, not really...

Okay, I don't feel like scanning in my sketches now...