Nah. Just kidding... I actually have a million and one things to post about right now, but I can barely get my hands on some internets...
Posted by Jared at 4:56 PM No comments:

Find this video. It's awesome.

Prison gates won't open up for me
On these hands and knees I'm crawlin'
Oh, I reach for you
Well I'm terrified of these four walls
These iron bars can't hold my soul in
All I need is you
Come please I'm callin'
And oh I scream for you
Hurry I'm fallin', I'm fallin'

Heaven's gates won't open up for me
With these broken wings I'm fallin'
And all I see is you
These city walls ain't got no love for me
I'm on the ledge of the eighteenth story
And oh I scream for you
Come please I'm callin'
And all I need from you
Hurry I'm fallin', I'm fallin'

Hurry I'm fallin'
Posted by Jared at 4:23 PM No comments:

So here's a big muscley guy with weapons. 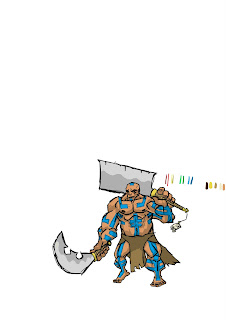 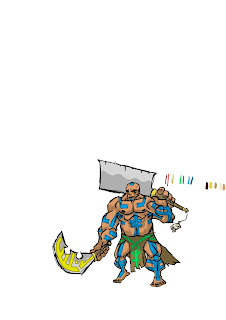 ...Theres a lot of extra space in the drawings because there once was something there and I erased it. So I'll resize it.

As you might have noticed, I'm practicing colouring. Yay colouring! Also I'm thinking that by June I'll be totally moved to my new place and settled down so I'm going to officially maybe declare that hopefully June will possibly be my not likely sketch-a-day month probably!

Don't look at me like that. I know politicians do this all the time.
Posted by Jared at 7:55 AM 1 comment:


Well, the reason I haven't posted these few weeks is because I've been having exams, then now I'm moving... So, haven't been able to do much. This is just a short post telling you whats in store in the weeks to come! 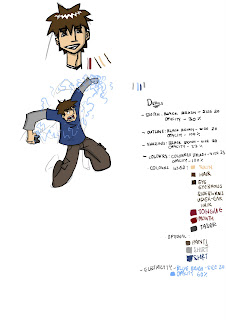 ...Ignore the words. I actually have a lot more sketches but I need to wait for a printer...

Okay, thats it, Please tell me if the sketch is okay. I'm talking to you, punk.
Posted by Jared at 1:15 PM 2 comments:

Well, i finally have some free time on my hands and I can post! Yay!

So, I actually wanted to post about the Drift Competition(?) a while ago but I was really busy(Haha yeah right...).

So, here we go! Well, since I don't know much about cars, dear reader, go here to find out all the technical stuff. Mostly, I remember that there were plenty of cool cars there, most people I stand next to are annoying, drifting cars are really cool and the smell of burning tires is really addictive.

I'm not going to talk(type) about the cool cars as I really don't know much about them. So, I'm going to start with the fact that people are annoying.

So, this is the scene. Me and the group that I do not like to mention(this is when a short Chinese dude pops up and says: "The group that you do not like to mention and I") are squeezed into a phone booth sized area with a man and his son, watching the S2000 and the AE86 race. I'm already annoyed as the son is already standing in the front but he insists on standing on the railing so as to block every other person that exists. It's at this moment when a little girl comes up and tries to squeeze her way to that man.Being the kind-hearted angel that I am, I give way to her and she happily gets to her dad.
subliminal text! scary! readmyblogmore readmyblogmore readmyblogmore...
It's then when a Godzilla-sized turkey-shaped bowling ball of a woman barrels her way through everything, taking advantage of the pathway I made. So, I'm crushed awkwardly to a woman next to me with several broken ribs, a punctured lung, a concussion and with my digestive track forcing its way out my anus while the race is going on. So, not wanting to make a scene, I live with it. Then, this living basketball woman has the nerve to take out an umbrella and continuously stab me in my retina with that sharp metal pointy part at the end of the umbrella! Then, as though they were planning it all along, the sweet little girl sits on the floor, taking up space, with her back turned to the race! Eating a sandwich! That little devil!

So, as I can't take it anymore and I decide to move to another not-so-good spot. This time, there's this tall, Indian man next to me. He seems like a nice, amiable citizen so I start looking forward to watching the next race in peace.

Then, as the race starts, this tall Indian guy jumps up onto the railing with a camera with a 12 meter long camera lens and starts taking pictures! This outing is turning out great for me!

Which reminds me, there's this new movie, Speed Racer starring Rain, I think it looks like an interesting movie. I saw the trailer when I went to watch Iron Man,(yeah, Iron Man is good. Go watch it. If you already did, go watch it again!) and it seemed interesting. I think Rain is going to get like 14 lines in the entire movie. 7 of which are going to be different forms of "No" and "Oh no"...

So, if anyone is wondering why I have no drawing its because I'm not done yet and it'll come up...EVENTUALLY!
*There are no prizes.
P.S. There are 2 subliminal messages in this post. Find them first, send a comment to this post telling me what they are, and you stand to win many fabulous prizes! Terms and conditions apply*

Hey, did you hear about the...

Well, half a month of no posts... I'm not sure anyone even cares though...

Anyway, I've been kinda busy with my exams (yeah right) and have been studying my ass off(oh really?). So, from now on, I think I only want to post with a drawing or a sketch as that was my purpose of creating a blog anyway...

But if you're wondering why there's no drawing with this post, well it's because I'm busy with a comic project that's finally under way and I'm a procrastinator.